PROJECTS / ADVOCACY
In the Beginning... - ACTIVISM

Broto (above photos) leading the Anti-apartheid protesters from the College of William & Mary, USA in an action to make the College divest from all investments in South Africa. Today, guns can be controlled by the same tactic of disinvestment from all businesses that invest in or profit from the gun industry.

With the new album I'd like to make a reference to "May you live in interesting times" which is a reference to the supposed ancient Chinese curse, but it's also a dog whistle to people who are feeling apocalyptic about the state of the world - environmentally, politically and spiritually. From the beginning, I stress that I didn't want to make a statement or prove a hypothesis or suggest a commonality to this work. Standing outside, I would say rather than a theme, I want to highlight these things that art does, like break down barriers, straddle disciplines, confuse categories, problematize identity, raise questions, suggest uncanny doublings or paradoxical contradictions. In short, I want to do the usual philosophical and aesthetic dance.

I've come to the states from Calcutta with its incredible poverty because everybody who loves art wants to be in the west. But I'm also here because I’m curious about the language, the way it floats around in the brain like clouds of water vapor, because today it's difficult to talk about music and art in any other way. The art world is expanding so rapidly, evolving so quickly, continually incorporating the non-art world into itself to create new forms of music and is in such endless argument with itself that only vague things are safe to say. I've decided to give this language the benefit of the doubt with this project. I've seen a lot of art in the Guggenheim and the Venice Biennial which make big, clear and unambiguous statements about power - about how those who promise to clean up things often spill more blood and how violence is a fundamental but unpredictable tool of power. Hopefully, the art made a big first impression, hopefully it will make a lasting one. I like art which I saw which transfigures the ugliness of the world into perfect serenity, like the photographs of Soham Gupta of the desperately poor people of Calcutta, where I'm from, playing games with identity and ideas of agency and empowerment. The whole point with the new album is to be magnificently transgressive and affirmative. Thank you. The official/commercial music all over the world is running out of breath. It is morally corrupt, aesthetically sterile, thematically superficial and temperamentally boring.

Everything depends on 2020, so do what you can because the whole democracy might disappear if we don't win. Hannah Arendt, the philosopher said "you know that the country is sliding into dictatorship if no one respects the idea of pluralistic parties.

Letter to Europe July 2018
Now that our president is trashing the European Union, I want to tell Europe not to waste any more money on military defense like the present administration is seeking. Rather, invest heavily in education, child care, health care and a clean environment. Don't become like us in the US where nearly half of our children live dangerously close to the poverty line, medical bills send whole families into bankruptcy, infrastructure is disintegrating, educational expenses and loans exceed mortgages, our public lands and resources are being exploited by the highest bidder and legislators are beholden to the wealthy.

Thinkers read and readers think. Start your own group and make a difference with your driven social conscience. Don't listen to fake news from the internet. Instead, read traditional news sources like the New York Times and the Washington Post.
Effort + inspiration = possibility. Be indignant and commit yourself to solving anything which frustrates you. If it is a big enough issue like corporate greed, climate change, pollution, etc.; organize a protest and convince journalists to publicize your issue. Slowly the picture will come into view. See the story through.
RESEARCH everything. Occupy everything. Restaurant workers occupy your kitchens; citizens occupy Congress; Union workers, students, and the middle class; join together and remember that democracy is not a spectator sport. Learn to challenge yourself as well. Black lives matter.
Be the North Star of life, awaken and strengthen what remains. Try to rehumanize yourself and don't dehumanize the other. Multiply, not divide. The way to decrease division is to increase the arts with music because we share sadness and happiness universally when appreciating an art form. So we need to fill the world with art. That will bring us together and lower this polarization. Always ask questions and thus show you care.

"Both Indian classical music and Minimalism project a strong rhythmic impulse combined with a certain static quality; 2 and 4 note motifs played out over long periods of time; one has to relax and see where it is going. The listeners have to enter a meditative state and for Indians it's a form of spirituality. For me, making music is an honor and I want to create with people I love and respect, my goal is to transcend culture, race and religion. Music is my religion it has all the spirituality I need. In India we approach music not only as entertainment but as a spiritual connection to nature. We use music to try to understand the science of sound.

A raga is not merely a cluster of notes with a theme or a motif. It is bound by some strict principles of its Arohana (ascending) and Avarohana (descending) characteristics. It usually has 5, 6 or 7 notes and sometimes permutations and combinations of these. It should have a Vadi, which is the most important note, and a Sam Vadi, which is usually the 4th or the 5th and note and secondary. What is core to the raga is its Prana or life and its power to be heard and to be propagated, to instill its emotional message in the heart of as many musicians and listeners as possible. Time will tell the validity of a new raga creation, by its acceptance, popularity and longevity.

Although my music has been described as minimalist I've never really agreed with that description but I've become used to it. What I really am and increasingly so is a maximalist composer. I'm interested in all kinds of music and sooner or later one of those styles finds its way into my own compositions. America is still the great melting pot and Americans are genuinely interested in different cultures and embracing them. Here we are all pushing the boundaries of jazz and my music reflects the entire American idiom: Raga, blues, rock, pyschedelic, country - you name it. Exploring convergences and divergences in the styles of music performed, we try to master not just the art of dovetailing them but the importance of respecting those very styles for themselves." 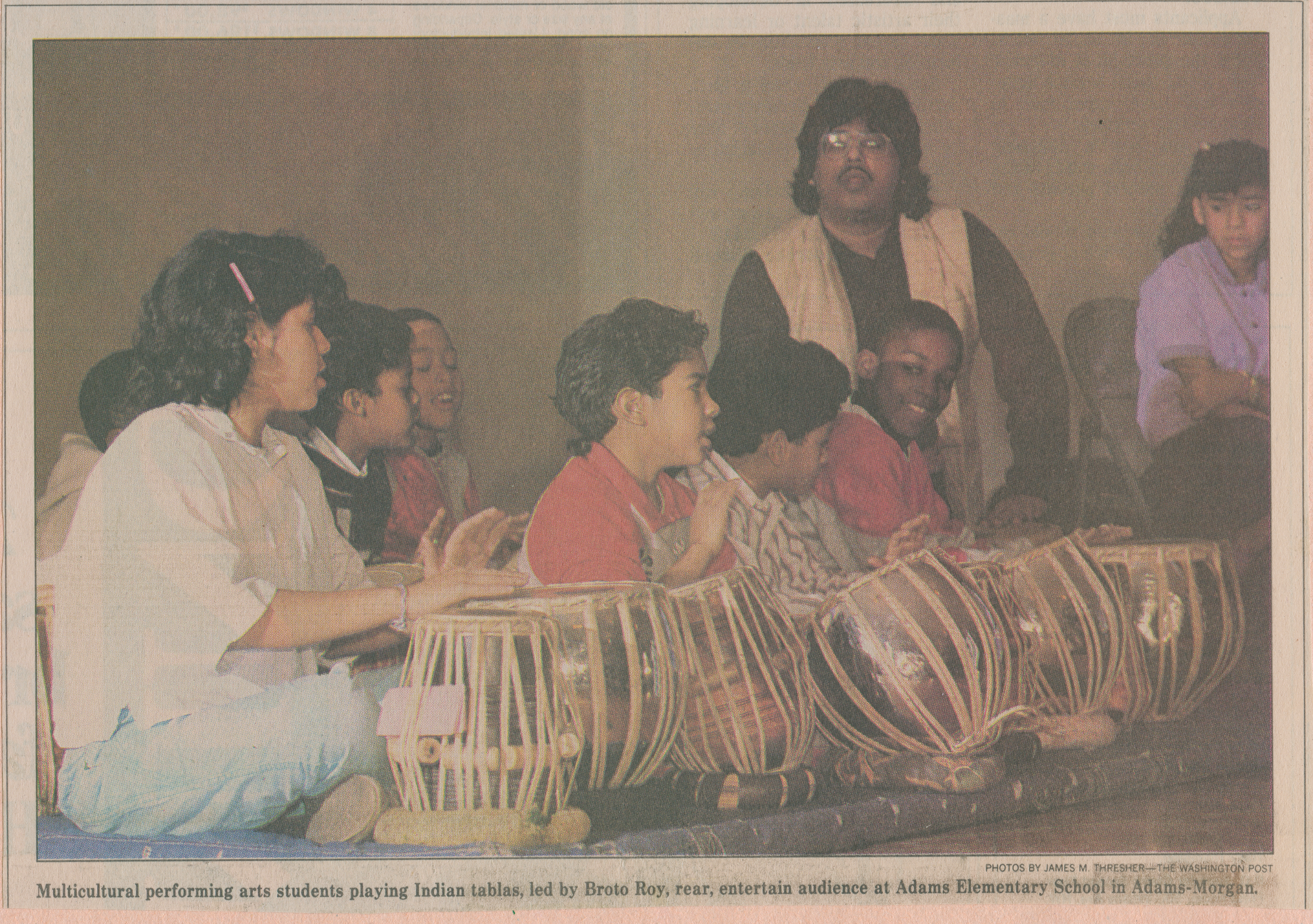 Broto has been teaching students of tabla for the last 30 years.
Several have played in his percussion ensemble Mukti 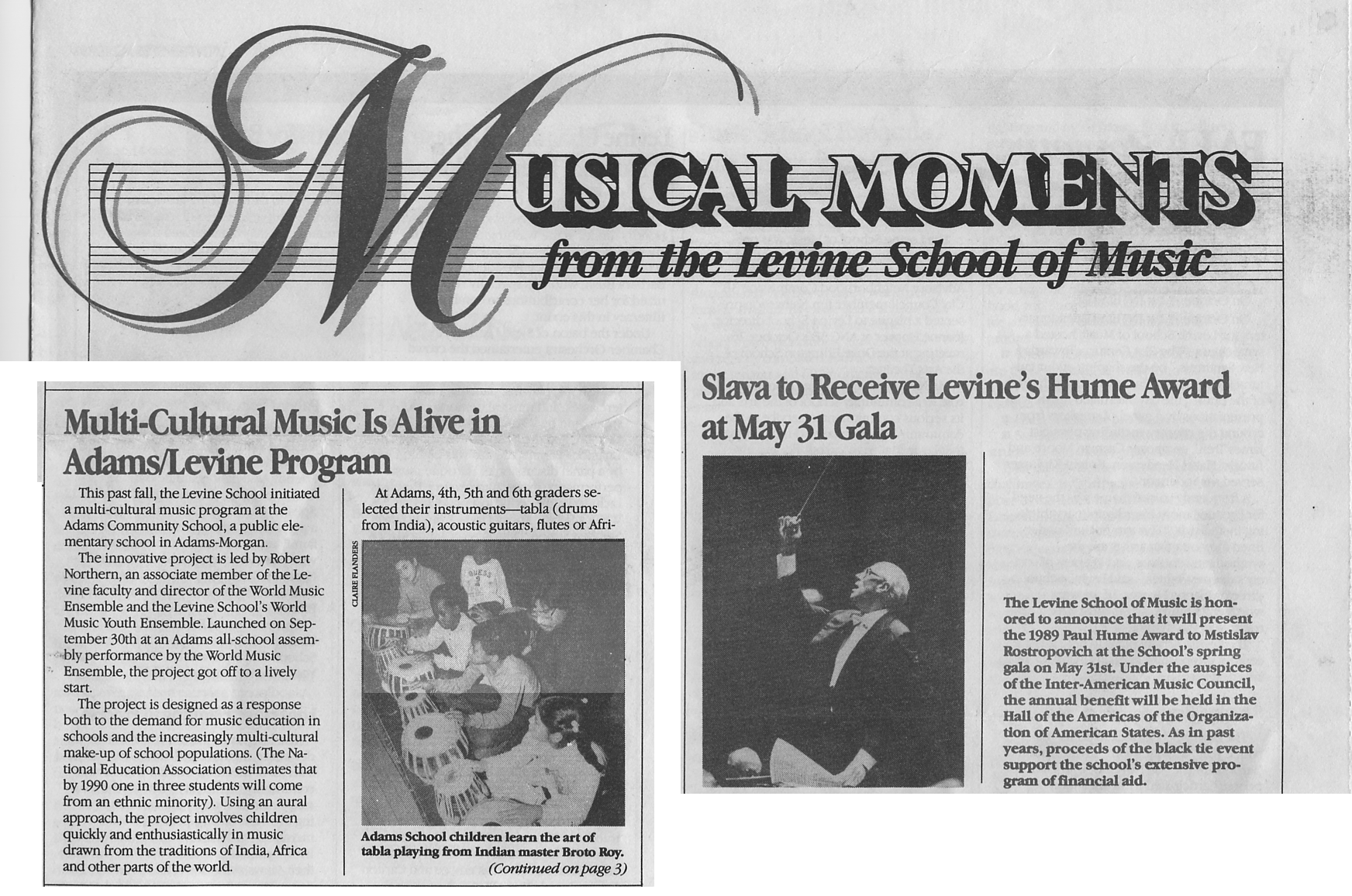 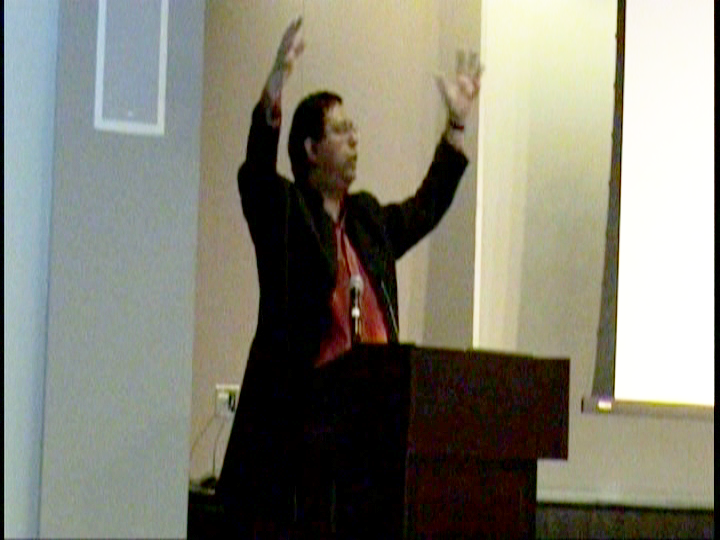 Broto lecturing at University of Maryland about growing up in India's culture, its caste system, India's music history and how it blends with the west. 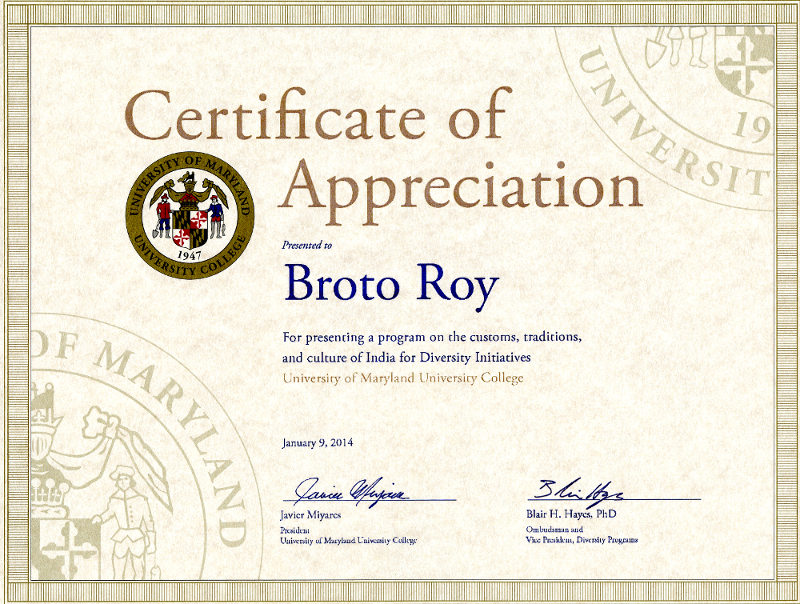 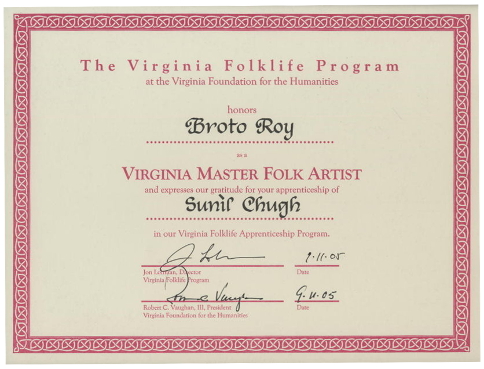 But once you made the night stop before my eyes
Sitting by broken trees and dying flowers you were once the rose we whirled around
Now we have come back joyous and drunken still on the liquor of that winter wind
You drank and turned to the wings of yellow rain
Boxwood and sheer curtains
The huge mansions of memory
Early winter, the chrysanthemums flame, the trees lunge skyward
like green smoke somewhere in elegant rooms
The white powder of tedium bleaches you

What I like best is making lists of what I like best
The good days are inventories near and far
I seldom leave the home - where would I go?
You could say my life is a lottery and I'm the only one without a ticket
You would say your life is better, you say it over and over
You do, what do I do?
I put things in boxes
I move boxes around
I have many things, some of them mine
I care for them
That is what I do
I do simple things
I move them around, clearing places to move them around
I tell you I do things over and over
Now you tell me something
Talk is what you do
I read the paper to see what day it is
I laugh
I act as though I know what day it is
I laugh again
It comforts me
I practice music
I talk on the phone
Water the plants while I talk on the phone
I am a person like anyone else
I act like a person
A person calls, I say whatever a person says today
A person says "today", I say "today" over and over getting it straight
Getting it straight is what I do
I want to get it straight
I say "what did you say? Tell me something again. Comfort me."
"Today"
Yes today
Is that it?
And when is that?
I leave behind anything which needs explaining

There's nothing in this gardenous world more delightful than blossoms lying where they fall
Soldiers sprawled from one ravine to another
Lovers under a bloody window
I look up through the branches dreaming of fate, my old friend
The blue skies above me, my old enemy death moving slowly
through the string of white clouds
One day I will wake up at dawn
I philosophize about my state as I get ready
I will put on my heavy shirt
I think of the long bitter day ahead
It will take hours to know whether I will live or die, which woods to pass by
which bridge to cross in the way
I love the sight of the squirrel
rolled over on the ground
I love being perceived through the heart
Half a man, half a flower
Reaching my hand out
Turning my palm away
One of the many pink and white blossoms
One of the many on the brutal lawn

B's sister Krishna Roy has dedicated her life to environmentalism and the tiger stamps shown below are the result of her project at the US Fish and Wildlife Service. The stamps are sold by US Post Offices all over the USA. As a child, Broto and his sister would go for winter vacations in Darjeeling, Sikkim and the kingdom of Bhutan, all of which just declared themselves a "tiger corridor" and represent tiger and snow leopard habitats 10,000 feet above sea level in the Himalayan mountain range- the highest in the world. Hope for the future!
Visiting India has become nearly impossible because of the increased pollution from factories belching filth into the atmosphere which has blackened India, China and Pakistan. This has come about only in the last 20 years because the western powers and the World Bank outsourcing all their dirty production (lipstick, oil refining, etc.) to these poor countries under the guise of economic development. They deny all negative effects like respiratory disease while the Indian and Chinese politicians have become their pimps, prostituting the atmosphere to coal powered factories with no regard to serving their people with clean air and water. They maintain they need this for development, but this is the wrong kind of development which if taken even a bit further will result in the inability to grow any crops. South Asia is hurtling toward complete disaster. NASA's website pictures from the space station show completely blackened areas from China to Sri Lanka, whereas on the Tibetan side of the Himalayas there is much less pollution. That area shows that intervention is not too late to halt complete environmental collapse.

"Details make perfection, but perfection is not a detail" " Leonardo da Vinci